The third book in The Kikki Trieste Trilogy.

Kikki Trieste’s Costa del Sol vacation turns deadly when she finds a severed jeweled hand. She reunites with her lover, Comandante Torres, and they take on an international conspiracy driven by a centuries-old murder, blood treasure and the dark arts. 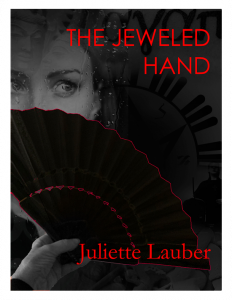 Veronique “Kikki” Trieste stepped out of the oppressive atmosphere of El Club Marbella’s formal restaurant, La Barraca, and breathed deeply. The heady nighttime fragrance of the gardens that made it the best resort on the Costa del Sol soothed her spirit.  She was grateful to be alone, free of hovering waiters, flirtatious maitre d’s and the international cast of tourists babbling in their native tongues.

Kikki didn’t mind that Elena, her good friend and companion for the ten-day vacation, had to leave before dessert to rehearse the choreography of a flamenco dance she wanted to perform that night. She was happy that Elena had chosen to stay at the five-star hotel with her, enjoy a bit of pampering, and leave her husband, Tomás, a celebrated guitarist, to fend for himself for a few days. He was staying out on the ranch, the finca, with El Pañuelo, the hot singer and gitano cantaor. Along with Elena, the trio were a flamenco tour de force.

Goddesses, the hours these people kept, Kikki thought, shaking her blonde hair loose from its clasp. She ran her hands through her hair, freeing the fine tendrils so they fell in loose waves around her face, and brushed the top of her bare shoulders. She clipped the tortoise-shell clasp to the strap of her short backless sundress and secured her wrap with her weighty shoulder bag.

Holy Monday, when chosen penitents in black and purple robes and pointed hoods drudged along the streets of every pueblo in Spain. It always spooked her.

It was Saturday around ten p.m., the night before Palm Sunday, Domingo de Ramos, the beginning of Semana Santa—Holy Week. An event that to her view commemorated the Spanish Inquisition. Especially, the final procession on Lunes Santo, Holy Monday, when chosen penitents in black and purple robes and pointed hoods drudged along the streets of every pueblo in Spain. It always spooked her. Add to that the mournful Andalucian Saeta song accompanied by the Church’s soldiers beating on drums, and to Kikki, it signaled wholesale persecution in the name of the chosen God of Los Reyes Católicos. She intended to avoid that spectacle and had a return ticket for the Monday morning flight from Malaga. By the time the drums beat, she’d be curled up in her cozy apartment on Paris’s Rive Gauche.

But now, the night was hers and still young—early by Spanish standards. Elena, Tomás and El Pañuelo wouldn’t perform until after two a.m. Kikki sighed and gazed up at the moon, high in the sky, luminous and nearly full. She smiled and tried out a piece of footwork Elena had taught her that week, snapping her fingers to the 12 beat rhythm of a bulerías. In the back of her mind she heard rich strains of flamenco guitar and the resonant, soulful tones of one of Andalucía’s prized woman singers, cantaora Pepa de Utrera.

Satisfied that she had stamped out dark forces, she stopped dancing and quickened her pace. In high spirits, she flew down the cobblestone path toward the peace and quiet of her villa at the back of the resort, near the sea. Womanly hips swinging, high-heeled sandals clicking, she followed the deserted moonlight path, singing softly and punctuating the downbeat of the staccato rhythm with snapping fingers.

Life was good and the evening was sweet. Kikki peered at the moon and prayed to the Greek Moon Goddess Artemis, High Priestess of the moon, lone goddess of the hunt, to guide her in chasing out evil beings. Like Rafa—the shady maitre’d who’d flirted non-stop with her in the restaurant, dampening her mood.

What had her Tarot card been that day? Death: a shrouded figure in black robes, face hidden beneath a frightening helmet.

She received an answer, a sign that she had been heard. A single cloud passed over the moon’s ivory face, shrouding her in mystery. A creature cried out in the night. Kikki’s forearms broke out in goosebumps. She slowed her step and pulled the silk shawl more tightly around her spare shoulders.

What had her Tarot card been that day? Death: a shrouded figure in black robes, face hidden beneath a frightening helmet. In her newly gifted Mythic Tarot deck based on Greek Mythology, Death was the dark God Hades, Lord of the Underworld and abductor of Demeter’s daughter, Persephone.

She shrugged off the malevolent signs. Whatever they portended, there was sure to be change in the air, for the Death card signaled major transformation —and all growth demanded transformation. Kikki straightened her spine and stood tall and powerful. She was Athena, Warrior Queen who feared nothing, wasn’t she?

Another shadow passed over the moon, darkening the path. It was the second in a nearly cloudless sky. She frowned, looking up at the moon again as she slowed her pace.

Kikki tripped. Something snagged her shoe. She caught her balance—her dancer’s instincts—and saved herself from falling.

Now she knelt down to see the small piece of wood or stone that had almost done her in. It glowed pale and she reached for it—pulling back at the last minute as her vision cleared and she made out a human hand, neatly cut at the wrist.

Terrified, Kikki gasped and then shrieked, letting out a scream that welled up from deep inside. Instinctively, she covered her mouth, stifling the sound. Her heart pounded and her stomach churned. Danger filled the once peaceful night.

Her agile mind raced. Intuitively, she knew she had been warned, but never in her wildest imaginings would she have interpreted the signs to mean that she was about to fall upon such horror. Certainly not in this sleepy Spanish resort. Someone had been murdered, but where was the body? And where was the killer?