The second book in The Kikki Trieste Trilogy.

In Paris 2015, Kikki Trieste answers a plea from the ghost of Queen Marguerite de Valois, daughter of treacherous Catherine de Medici, to break a 400 year-old curse.

ORDER NOW FROM YOUR FAVORITE BOOKSELLER 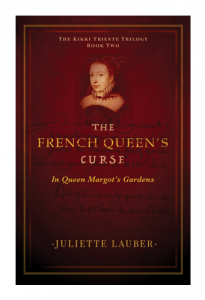 Queen Marguerite de Valois swept back her veil with swift movement of long delicate fingers, face drawn taut by determination and a strong hint of defiance. In a small clearing deep in a wintry forest, she knelt near the embers of a dying campfire. The last remnants of orange flames flickered and leapt like fingers of fire reaching for her dark robes. The porcelain skin of a young woman of royal lineage and great beauty. Her hands pressed together in a gesture of prayer or perhaps hope, and then she backed away. The fire hissed and crackled in answer.

Head lifted to the stormy moonlit sky, she took a deep breath exhaling ghostly vapors and then reached inside her cloak.

Through luminous yet fiery dark eyes, tears streamed down her pale cheeks as she drew out a long-stemmed red rose. Her lips softened as she kissed velvety petals. She raised her head towards the sky and gazed fervently upon the moon and then cast the rose into the flames.

She whispered a prayer to invoke the ancient déesses who protected women like her. An homage to the fierce Sumerian Inanna, Goddess and Queen of Heaven and Earth and Mother Goddess—worshipped by the great ancient civilization of Mesopotamia millennia ago. All one in the Goddess.

I’d love to gift you a sneak peek of my latest book, The French Queen’s Curse. Sign up for my newsletter and receive the first two chapters for free!

Your privacy is always respected. Your information will not be sold. Decide you want off? With the stroke of a key, you can remove your name from my list at any time.

Véronique “Kikki” Trieste stood at the French-paned door and stared down at the River Seine, chilled to the bone even in her long white robe. The staccato of a barge hitting the fast-running water under the nearby bridge, the Pont Royal, had awakened her at three a.m. from a haunting yet familiar nightmare of a bloody massacre centuries ago.

Paris’s beloved River Seine was a peculiar gray-green dotted with golden halos from the overhanging soft yellow lights on Quai Voltaire. On the bridge, they glowed only dimly in the thick fog—lanterns hanging midair.

From the floor-to-ceiling windows that fronted her penthouse apartment on Quai Voltaire, Kikki had a perfect view of this ancient center of the City of Light—just like Voltaire, who had lived and died in this very building—rife with ghosts.

She sniffed the cold damp air and sensed the oncoming snow. That would be a welcome change from the perpetual grisaille that hung over the Île de France. Paris’s dirty little secret.

Kikki knew that, Gaia—Mother Earth and Nature, would have her way. Weather changed rapidly as she spewed forth her wrath onto those who violated her planet.

Still, she thought, a snowy Winter Solstice and a full moon aligned perfectly for this important week to come.

The Minoan Snake Goddess that she and her lover Pepe Torres had uncovered on a deadly weekend in Santorini in August was to be exhibited at the Louvre, the very day of the Solstice—December 21, five days from now.

The Gala Exhibition would feature the Snake Goddess, sacred to the beliefs of the great matriarchal Minoans of Crete. As early as 1600 BC, the precious treasure was carried to their sister colony on Santorini—or Thera as it was known in ancient times.

Kikki shivered and a spike of pain hit her left temple as her eyes took in the images.

She watched the beautiful young queen, Marguerite de Valois, lift in bas relief from the book cover of La Reine Margot by Alexandre Dumas on her side table. As the image hovered, blood from the wounded man began to stain the white robe Kikki wore.

Her temple throbbed.  Damnit, she swore silently. Please the Goddess, not now. She felt an irresistible pull to other worlds in the darkest time of the entire year.

Dark brown eyes wide and pupils round black moons, she watched the Seine transform to a scarlet river rushing towards the sea. The nightmare that had awakened her returned as vision.  She smelled the stench of filthy, sewer ridden streets of sixteenth-century Paris and saw with crystal clarity the Seine, all filled with the blood of Huguenot Protestants and other souls caught in the massacre that began that eve of Saint-Bartholomew’s Day, 24 August 1572—during the wedding feast of Marguerite de Valois to her Protestant cousin, Henri de Bourbon, King of Navarre.

An apocalyptic horror born of a nefarious plot by Marguerite’s mother, the Queen Regent, Catherine de Medici—widely known as the Black Queen.

By the time the scourge was over, one hundred thousand souls had been slaughtered throughout the whole of France. That was Kikki’s last conscious thought before she succumbed to the vision and shifted to otherworldly realities in time, space and dimension. She was drawn, as in her nightmare but more real in vision where she literally entered that past life and that terrifying night.

Praise for The French Queen’s Curse

“Juliette Lauber has fashioned a heady, passionate novel, both complex and illuminating.  She carries us back in time to ancient matriarchal origins and tracks how they have been covered over repeatedly by the violence of the patriarchy.  Importantly, she shows how the struggle continues in our times, how events of today might well be manipulated by these dark forces of the past.  Kikki is a canny and sympathetic heroine striving to utilize her High Priestess powers for the good. Her partner, Torres, grounded in this world, is a perfect foil.  And beautiful, innocent Queen Margot!  Was ever a monarch more ill-served?  It’s thrilling to read how Kikki works to restore her to her proper place and set the world aright.  I was swept away by The French Queen’s Curse.”
~ NC Heikin, award-winning filmmaker and playwright

“A thoroughly engrossing historical suspense rife with scandal, secret societies, warring adversaries and an ancient curse—all amid the inviting backdrop of 16th century Paris. This book is a perfect escape!”
~ Lisa Towles, award-winning author of Ninety-Five and The Unseen